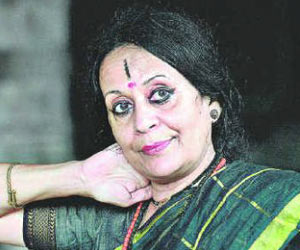 An eminent Indian classical dancer, she is the maestro of Odissi dance form. She is also proficient in performing other dance forms such as Kuchipudi, Bharatnatyam and Chhau. Well, we are talking about the great Indian dancer Sonal Mansingh, who has made Indians proud. In this article, we will present you with the biography of Odissi dancer Sonal Mansingh, one of the most prominent dancers of India.

She was born in the year 1944 in Mumbai. Her dance performances are simply awe inspiring and have brought her lot of fame and fortune. Her works have always been highly praised. Infact, she has been honored with several awards as a mark of appreciation of her works. In the year 1992, she received the Padma Bhushan, which is the highest civilian award of India. To know the complete life history of Sonal Mansingh, read on.

Not only she has committed herself to the dancing field, but also made an incredible contribution in bringing a smile on the faces of millions of people. Sonal Mansingh is the first Indian dancer to have been honored with Padma Vibhushan, the second highest civilian award in the year 2003. Due to her great thoughts and opinions, sometimes, she is also called a philosopher.

She is a multifaceted personality, who is called by different names, such as a dancer, philosopher, social reformer, thinker, choreographer and teacher. She has been performing on stage since 1964. She has taken formal training in Chaau dance, Bharatnatyam, and Indian music. In the year 1977, Sonal established the Centre for Indian classical Dances (CICD) in Delhi.

Her best choreographic works include Mera Bharat, Devi Durga, Indradhanush, Sabras, Manavatta, Aatmayan, and Draupati. She has traveled all over the world and entertained people with her classic dance performances. She is of the opinion that, dance should speak the issues concerning the society and people at large. Some of her choreographic works have brought forth, issues related to women and environment. She has always participated enthusiastically in seminars organized to discuss social issues.

At an art festival, she came across her first husband Lalit Mansingh. His father Dr. Mayadhar Mansingh took his daughter-in-law to Odissi guru Kelucharan Mohapatra and she began her training in Odissi dance from the year 1965. Lalit had to shift to Geneva for professional reasons. In the meanwhile, she went to Delhi to continue with her dance training. As years passed by, the couple decided to go apart.

Sonal Mansingh took up dancing at the time, when it wasn't considered to be a very good thing. However, her parents always gave her liberty to pursue what she wants to achieve in her life. She was born in a very broad minded family. Her mother Poornima Pakvasa herself had a very artistic mind and her grandfather always advocated for the equality of women.

Her grandfather Mangaldas Pakvasa was a great freedom fighter. He was one among the few initial governors of India, so celebrated personalities used to frequently visit her home, even when she was young. He gave a boost to her artistic talent and encouraged her to pursue her dream of enriching the Indian culture with her dance.