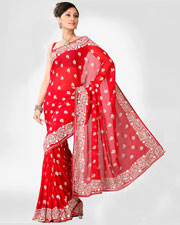 What is Sari
A long strip of colorful multi-patterned cloth, sensuously wrapped around the body, and teemed with a blouse! Is this not how sari, the traditional clothing of the womenfolk in India, is often described to people newly exposed to our culture? Saree is, indeed, a very long strip of unstitched cloth, which is worn over a similar colored petticoat. Its length ranges from four to nine meters, depending on how an individual wants to wear the sari. The blouse worn with it is also known as Choli or Ravika.

The most common style of wearing a sari is by draping its one end around the waist and neatly arranging the other over the shoulder baring the midriff. However, there are many variations in how women wear this dress in different states of India. There can also be a lot of variation in the designs of the choli i.e. the blouse of the saree. For instance, for daily wear, the blouse can be a normal one with quarter or short sleeves. Sleeveless or embroidered blouses are worn to give a dressy feel.

Similarly, for occasions like wedding and parties, some Indian women also wear backless or halter-neck blouses with their sari. Though you will see women wearing such blouses with their sari only at select upmarket places, it gives a very glammed up Indo-western look. Women in the armed forces don the sari with a half-sleeved shirt tucked in at the waist. Occasion is the main criterion that decides the style in which you wish to wear your sari.

Saree is a very popular form of clothing in India. So, one will find various type of the clothing being sold in the market. Infact, every state of India excels in manufacturing a certain type of sari. Thus, you will find plain or patterned georgette saris, heavily golden-zari embroidered zardozi saris, silk sarees with heavy pallu, and so on. The prices of the saris also vary greatly. While the normal saris can cost as less as 500 rupees, the really expensive ones, especially those made by the Indian designers, could cost lakhs of rupees.

The various types of sari manufactured by different Indian states are: