The Vijayanagar Empire was famous for its rich heritage and beautifully constructed monuments that were spread over Southern India. The rich cultural heritage of South India was the main inspiration for temple architectural styles. The construction style of Hindu temples was inspired from the blending of different faiths and languages. Local granite was used in building temples first in the Deccan region and then in the Dravidian regions. The rulers of the Vijayanagar Empire were admirers of fine arts and encouraged people to indulge themselves in music, dance and handicrafts. 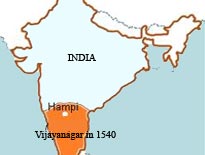 Trade and commerce was carried on vigorously and this brought about new ideas and a multitude of changes in the kingdom. Irrigation and water management systems were enhanced and developed during the Vijayanagar dynasty. Languages like Telugu, Tamil, Kannada and Sanskrit developed and literature reached new heights. South Indian classical music known as Carnatic music developed tremendously and achieved its current form. Vijayanagar kingdom created an era where Hinduism was a unifying factor and went beyond all boundaries of language and beliefs.

The Vijayanagar Empire emerged as one of the most powerful kingdoms in the Peninsular India and ruled there for 200 years. The empire was so strong that four Muslim kingdoms had to come together to destroy this strong kingdom. The ruins of this great kingdom can be seen even today at Hampi which has been declared a protected site by the UNESCO.