One of the most able administrators and ruler in India was undoubtedly Chhatrapati Shivaji. He was the founder of the Maratha Empire in India. With his flawless warrior skills and unlimited courage, he ruled the Deccan region, parts of central India and parts of modern day Pakistan with a firm hand. It was due to his efforts that the Mughals faced a decline in their empire. Using guerilla warfare techniques, he was successful in annexing a major portion of the Mughal Empire. Given here is a short biography about Chatrapati Sivaji that covers his life history briefly. So check out information on King Shivaji.

Shivaji was born in Shivner on 10th April, 1627 to Jijabai and Shahji. His father Shahji was a nobleman in the royal court of Bijapur. Shivaji was named so after Lord Shiva of the Hindu mythology as his mother was an ardent Hindu devotee. Since childhood, Shivaji was brave and never feared anything. There are many instances in his childhood that show he was a born ruler. At the young age of fourteen, he had the dream of building his kingdom. At the age of 20, he took out his very first military attack and captured the Torna Fort of the kingdom of Bijapur. 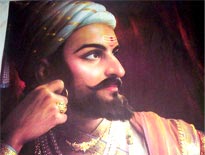 After that there was no stopping him and he went on to capture Kondana and Rajgad forts and exercised full control over the region of Pune. Around the year 1659, Shivaji took over the forts in Western Ghats and the ones near the Konkan coast. In order to disrupt Shivaji's series of triumphs, Adilshah arrested his father Shahji by unfair means and sent armies against Shivaji and his elder brother Sambhaji. However, the armies were no match for the two strong brothers and were defeated by them and their father was released. However, Afzal Khan later seized an opportunity to kill Sambhaji by deceit.

Shivaji was an efficient ruler and administrator and ruled with a just and firm hand. His government had concepts that we know of now like the Cabinet known as Ashtapradhan Mandal, foreign affairs known as Dabir and also an internal intelligence wing. During Shivaji's reign the army was very efficient and dependable. Since Shivaji ruled a major part of the Western coast area, he also commanded a strong navy force. Shivaji is known for his protective and fatherly attitude towards his citizens. He is remembered till date as a hero who worked for the welfare of his subjects and state. Shivaji breathed his last in 1680 after suffering from fever for three whole weeks.