The Maratha Empire was founded by the great warrior Chatrapati Shivaji during the year 1674. The Indian Maratha confederacy was established at the area around Pune from Bijapur. The Marathas came to power as the Mughals started to decline around the 17th century. The Marathas were in power from 1674 to 1818 and during the peak of the Maratha rule covered a territory of around 250 million acres. The Marathas were skillful warriors and were fiercely possessive about their land. Read about the history of Maratha Empire.

The Maratha nation was founded by Shivaji after many battles and guerilla warfare against the Mughal Emperor Aurangzeb. Though he was successful, he died in 1680 leaving the kingdom vulnerable to attacks and external aggression. The state of Maratha was ruled by Shahu, a grandson of Shivaji till 1749. During his reign, Shahu appointed a Peshwa or a prime minister who would act as the head of the state under certain emergency conditions in the kingdom. With time, the Peshwas became the real rulers of the empire while the successors of Shivaji were just nominal heads of state. The Maratha Empire was successful at keeping the British forces from attacking India for most of the 18th century. 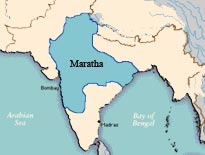 The Marathas were adamant about their territory and waged three fierce battles against the British. The result was that the British annexed the territory that was ruled by the Peshwas. Thus, ended a great empire that had ruled major parts of central and southern India with a firm hand.